WWII on the Homefront
May 2, 2021. In this oral history program participants recalled what life was like at
​home during the war when they were a child or teen.
After the Rebellion: Shays' Settlement in Vermont
Click here to visit the Shays Settlement website

March 26, 2021. Historian Steve Butz talked about the rebel settlement that Daniel Shays and his compatriots founded in Vermont after fleeing the authorities in the aftermath of their insurrection.
How We Met February 12, 2021
Monthly Programs 2020
The Night Before Christmas
Read on Zoom on Dec. 11, 2020 by
John-Arthur Miller
LIME KILN TALK POSTPONED
Due to concerns about the coronavirus we have decided to postpone Mike King's talk till early summer. Date to be announced. 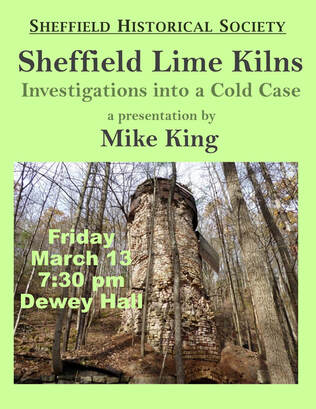 Lime Kiln Talk at Dewey Hall
POSTPONED to 2021
Like me, you probably have wondered, “What exactly is lime, what was it used for and why was it heated in a kiln?” Lime kilns dot the woods around here. Lime is a common soil amendment to make lawns lusher. Quick lime, created by heating lime, is used in plaster and also in smelting iron ore, mined locally in Revolutionary War times. The lime industry was once important in Sheffield, with its limestone bedrock.

You can find out more this summer, when the Historical Society welcomes Mike King to Dewey Hall for a talk entitled, “Sheffield Lime Kilns: Investigations into a Cold Case.” The presentation will include a segment of Mike’s film on Sheffield lime kilns, as well as an exploration into the science and history behind lime production in this region. The talk is free and open to the public. 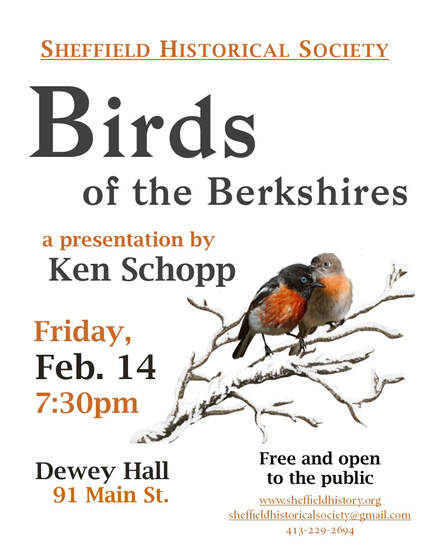 Birders know that changing climate, ecosystems and migration patterns mean that birds that were rarely or never seen in the Berkshires have been appearing here in the last few decades.

On Friday, February 14 Ken Schopp will give a photo presentation of some of those rarely seen birds, which he captured on film here in the Berkshires and elsewhere in the state. He will talk about these newcomers, as well as how the native bird population has adjusted to these same environmental factors over the past century. Ken is an avid birder and expert on local birds, as well as a craftsman of waterfowl decoys.

​The talk is at 7:30 pm at Dewey Hall, and is free and open to the public. For more information email sheffieldhistoricalsociety@gmail.com, call 413-229-2694 or visit sheffieldhistory.org. 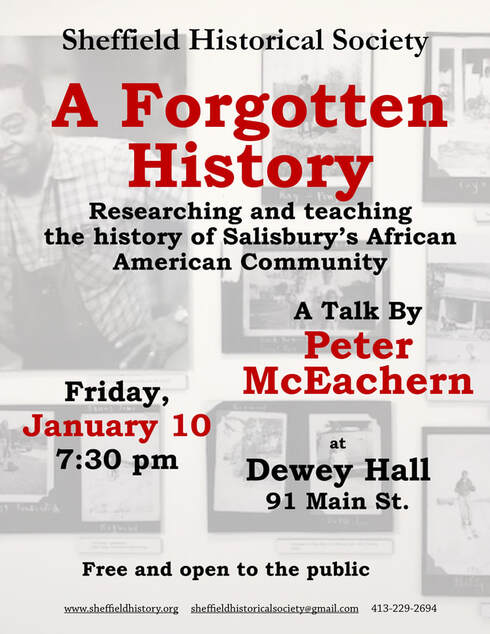 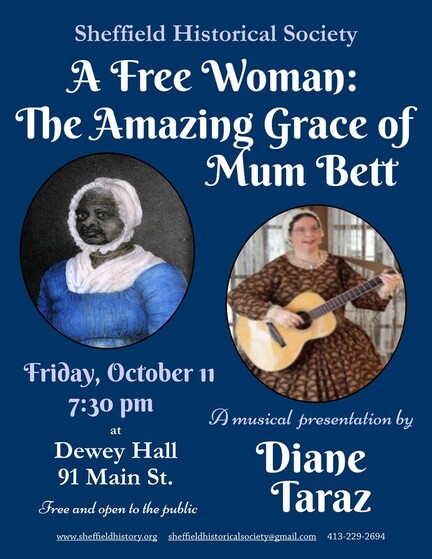 Mum Bett Musical Program
Oct. 11, 7:30pm
Join us at Dewey Hall for a musical program honoring Elizabeth Freeman, whose successful lawsuit for her freedom directly led to the abolishment of slavery in Massachusetts in 1783.
Dressed as Mum Bett would have, Diane will talk about this icon's life and perform songs that she might have sung or heard. These songs include slave spirituals, hymns, and popular 18th century ballads.

The program at Dewey Hall is free and open to the public.
​ 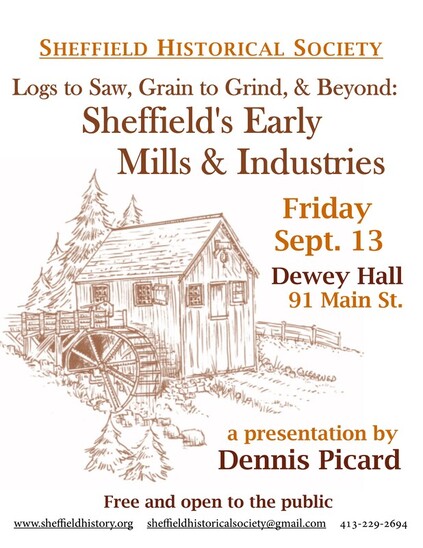 Lecture on Industry in Early Sheffield

On Friday, Sep. 13 the Sheffield Historical Society welcomes Dennis Picard to Dewey Hall for “Logs to Saw, Grain to Grind, and Beyond: Sheffield's Early Mills & Industries” a lecture that looks at how early industry shaped the economy and development of the town. The first mill was on Gilligan’s Pond and was built in 1735, a mere three years after the town’s founding. Picard will talk about the different Sheffield industries that relied on water power before the age of engines and electricity.  The program is at 7:30 pm and is free and open to the public.

Dennis Picard has been a museum professional in the living history field for over forty years. He has held the position of Assistant Director and Director at several sites including Fort Number Four, Storrowton Village Museum and the Sheffield Historical Society. Picard works now as a professor, teaching museum studies at Westfield State University. Picard, with his background and museum experience, has authored many articles on the lifestyles and folkways of New England and has also served as a consultant for many historical societies, museums, film scripts and historic novels.

His presentation at Dewey Hall (91 Main St., Sheffield) reveals the seldom known industrial history of Sheffield in the colonial period and early republic. When one thinks of the town’s early years, a bucolic image of farmers and small tradesmen comes to mind, but really mechanized industry was central to development from the town’s founding. Without the timber, stone, and bricks that were processed using mill power, no houses, farm buildings, livestock fencing or shops could be built. Without grist mills, the wheat and corn that the farmers grew could not be processed into flour. Nor could crops thrive without the lime made at local kilns. Indeed, some industries like iron production made this region a crucial source for the weapons that won the war for Independence.  Picard will tell this story of early industry through images and objects that might just have you thinking differently about what Sheffield of the 18th century looked like. 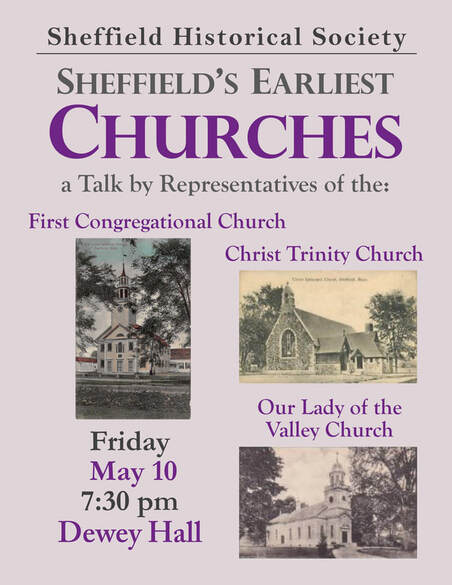 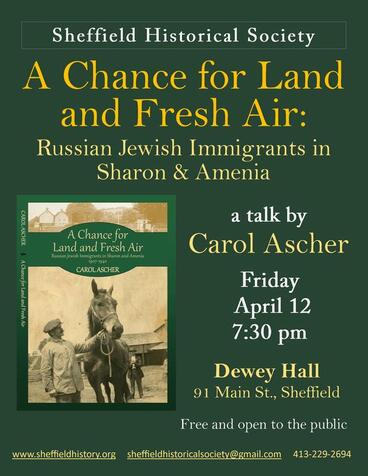 On Friday, April 12 at 7:30 pm we welcomed Carol Ascher, to give a presentation on the topic of her book A Chance for Land and Fresh Air, Russian Jewish Immigrants in Sharon and Amenia, 1907-1940. The talk will be at Dewey Hall, 91 Main St., Sheffield, and is free and open to the public. This compelling narrative is about the courage, determination and imaginative spirit of thirty Russian Jewish families who, arriving in America at the turn of the 20th century, soon purchased small farms in western Connecticut. Similar stories took place in thousands of rural communities throughout America, thanks to Baron Maurice de Hirsch, a Belgian Jewish philanthropist who believed that anti-Semitism would end if only Jews could own land and become productive farmers. For decades, a generous fund that he established offered mortgages and other support to Jews willing to try their hand at farming. Many of the original thirty families supplemented their farm income by offering kosher vacations to New York Jews. Around 1920 they began to move to neighboring Amenia, NY, on the train line, transforming the town into a lively Jewish resort.
​
The book, which grew out of a 2017 exhibit at the Sharon Historical Society & Museum, resonates with audiences today whose immigrant families likewise struggled to assimilate in a new land, learn English and take up new profession. Carol was drawn to this story, as she is the daughter of refugees from Nazism. Growing up in Topeka, KS, she began writing at a young age to make sense of her two very different worlds: the community of Jewish refugees in Topeka and the Midwestern Christian world of her public school and neighborhood.

The author of seven books and numerous short stories, essays and scholarly articles, Carol has won several awards for her writing, including four PEN/National Endowment for the Arts Syndicated Short Fiction Awards, two awards from the New York Foundation for the Arts, a Thomas Carter award for literary nonfiction, and a fellowship from the Memorial Foundation for Jewish Culture. The exhibit, "A Chance for Land & Fresh Air" won the 2018 Connecticut League of History Organizations Award of Merit, and Carol won the NWCT Arts Council CultureMAX award for heritage professional for her work on the book of the same name.  She frequently lectures about researching local histories, recording oral histories and conducting archival research. For more information on the book and Carol please visit https://www.achanceforlandandfreshair.com/. 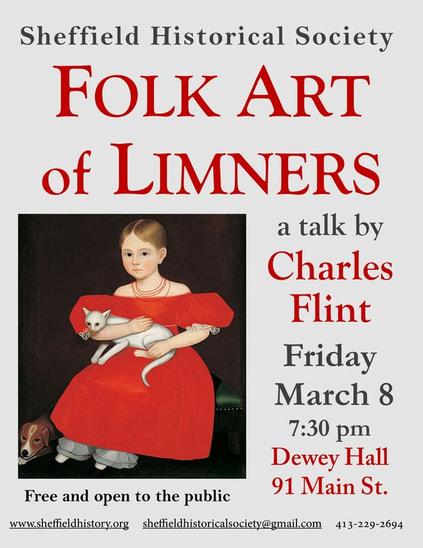 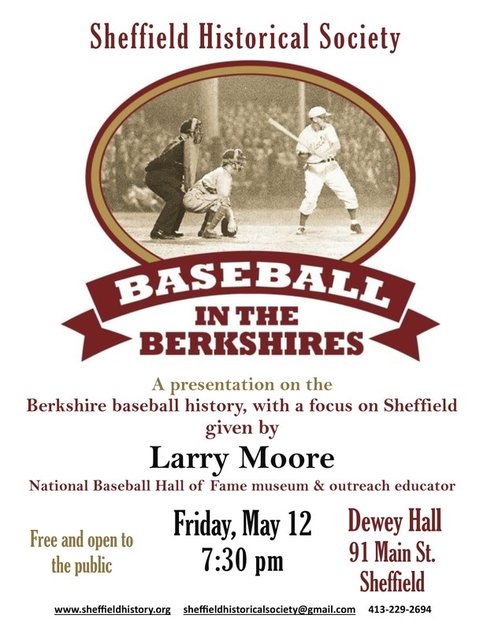 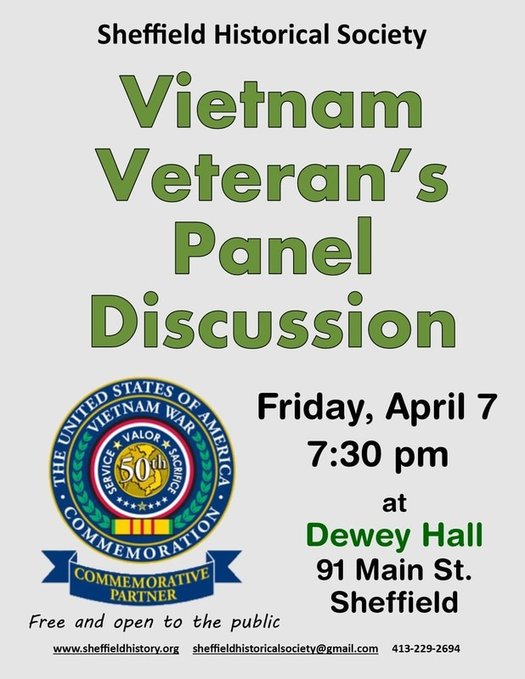 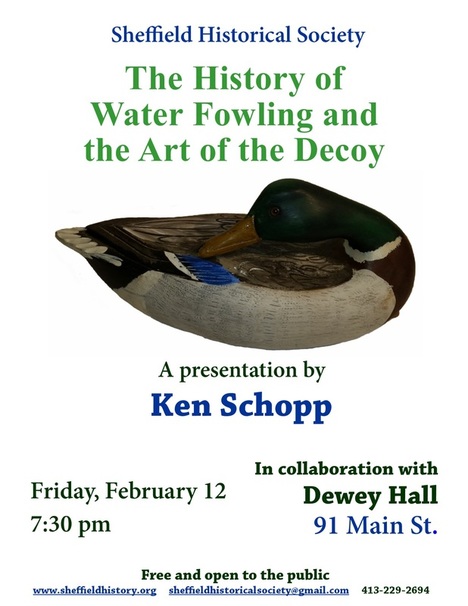 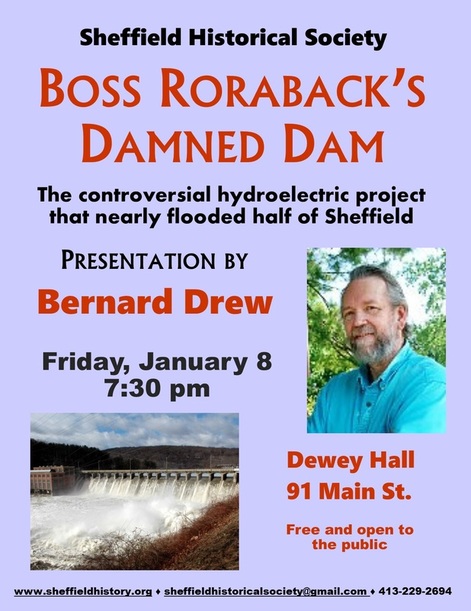 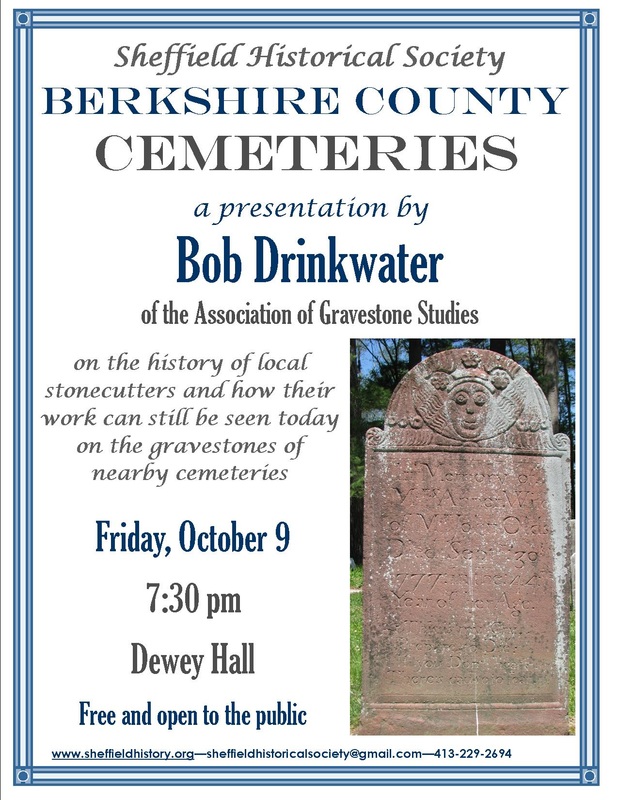 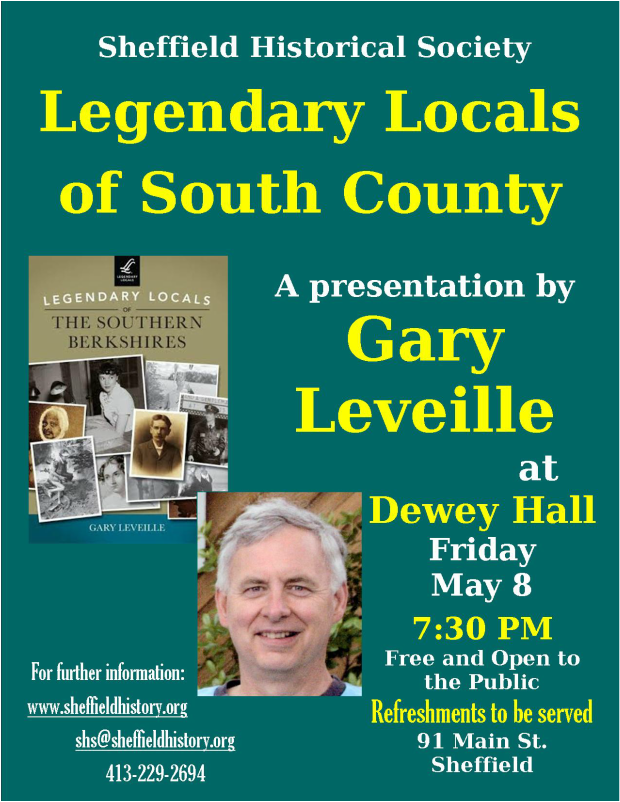 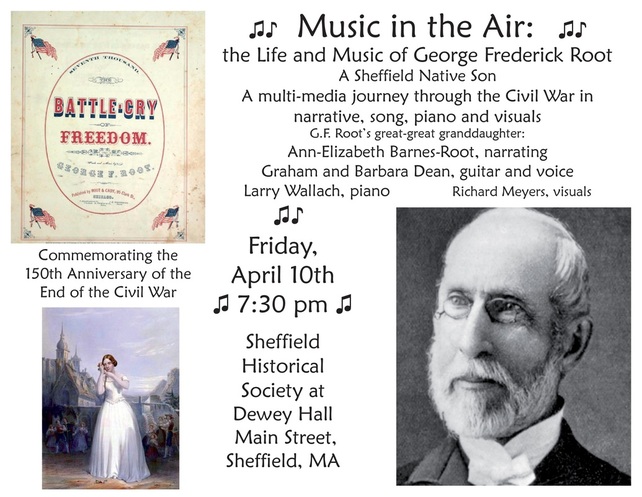 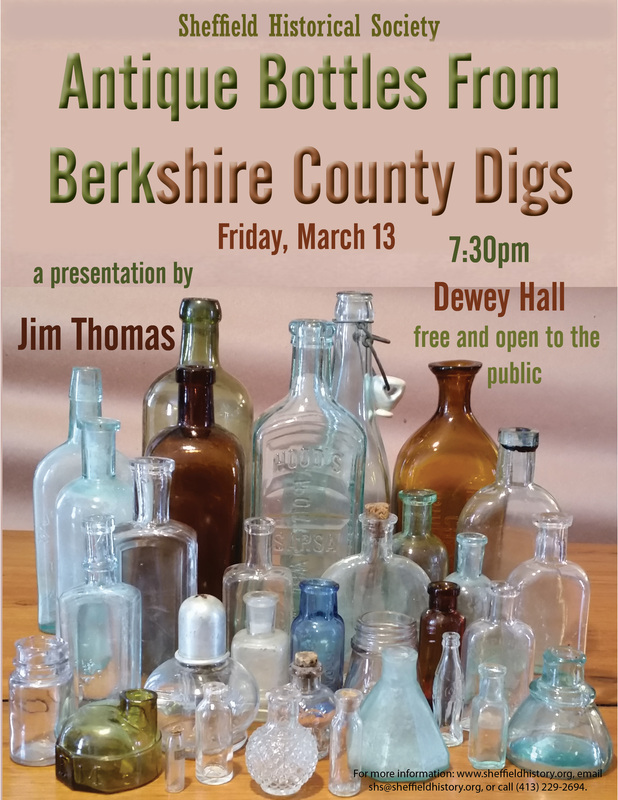 ﻿Join us for our Free Monthly Programs!
For more information, please call 413-229-2694 ﻿or email shs@sheffieldhistory.org 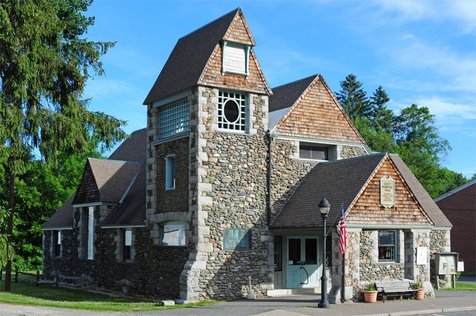